In 2010, Tyler Smith met Ali Farka Toure’s nephew, Ibrahim Kelly, at a drum circle underneath the Hawthorne bridge in Portland, Oregon.  It was here that Dusu Mali Band was born.

Dusu is Joshua Conneran on drum set, Justin Keeth on Bass, Tyler Smith on guitar and kamel n’goni, and Ibrahim Kelly on guitar.  All members sing and play percussion.

“Dusu” means “heart” in Bambara, the primary language spoken by guitarist Ibrahim “Ibu” Kelly, a native of Mali, West Africa.  In your heart is where the band would like you to feel their music.

Based in Portland, Oregon, Dusu Mali Band plays improvisational African blues rock & roll, creating unique live music experiences every time they hit the stage.  Mali-style African grooves can turn into heavy hitting rock & roll, and be followed up by full-band West African drum breakdowns.  The music has been known to take on a life of its own, and can get people of any age dancing. 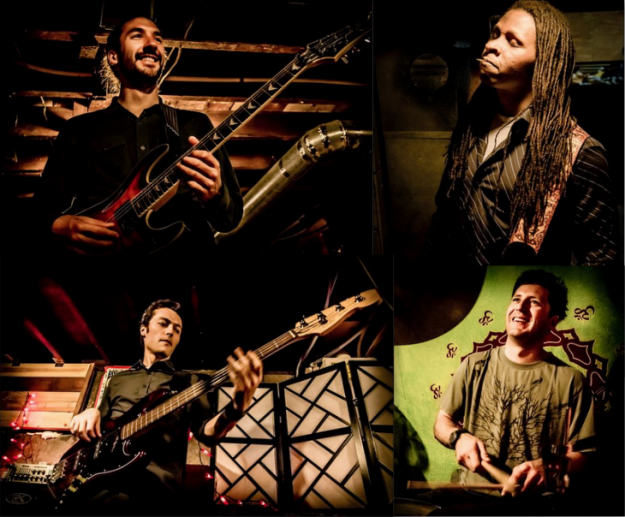 Dusu writes original music that is a unique blend of styles.  Some Dusu songs are based on traditional West African music, but most are completely original.  The songs generally start from one or two of the members and are developed as a group.  The songs also continue to reveal new aspects through time as the band searches for new approaches to their live show.

The group is focused and committed to the do what it takes to keep things moving in the right direction.   The band’s latest album, Never Give Up, pays tribute to the story of the group and the persistence and hard work it took them to get to where they are today.

Their ultimate goal is to make people happy by writing new music, performing around the world, and hosting music festivals in the Pacific Northwest.  Be sure to keep an eye out for Dusu Fest, a music festival they started in 2014 just outside of Portland, Oregon.